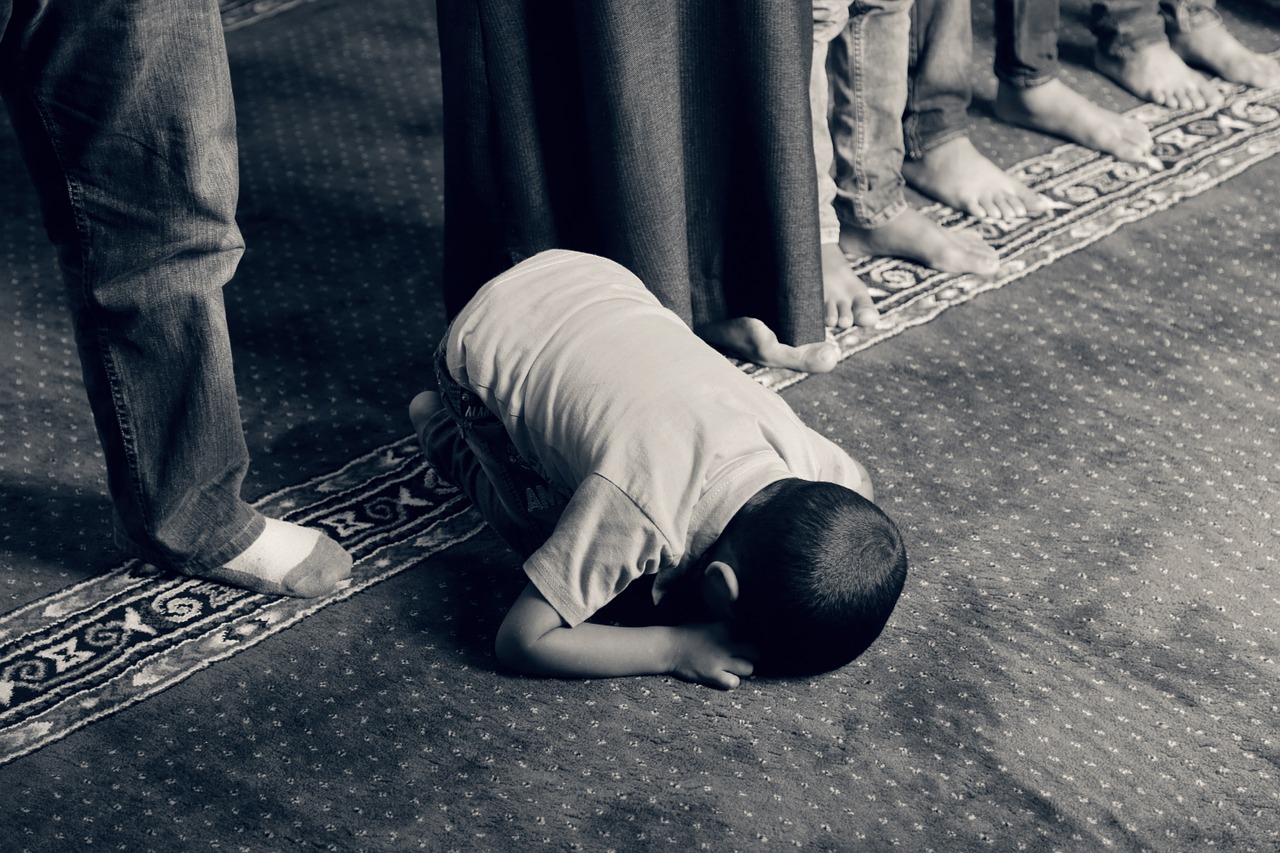 With materialism increasingly overwhelming humanity, and surely Muslims are not an exception, comes the need to assert the connection with one’s self, and tie it to its roots, lest more challenges drive people, not just out of the boundaries of happiness and self-content, but also out of the boundaries of humanity, downgrading them to the state of objects or some other beings far below the human stature as elevated by God, and as dignified as He has ordained; being His vicegerents on earth.

Another persisting need is reviving the divine link and harmony with our Creator, a sort of connection bonding us with the essence of creation, the Universe, our position in life, and most certainly with our being. How can one miss out on such state of tranquility, a heavenly canon asserting our Islamic dogma and absolutely our impartiality towards life.

One of the blesses God has granted His creatures is engaging in divine communion with His Majesty, through an all-encompassing exercise rendering an exuberant spiritual, physical and mental being; that’s more rooted in its essence and aware of its being- That is Prayer.

Constituting one of the Five Pillars of Islam, Prayer is one act of worship that is obligatory upon every Muslim who is sane and have reached the age of puberty, and in the case of women, free from menstruation and confinement due to child birth and nursing, periods during which women are totally exempted from Prayer.

It is an exercise that benefits the whole of our selves: for our souls to transcend to higher levels of awareness, our bodies to get energized, and our mental being to freshen up and get rejuvenated, besides feeding a love bond with the Almighty.

Muslims have a daily invitation to engage in 5 sessions of serene state of communion with Allah. The five sessions are actually the 5 Obligatory Prayers Muslims are commanded to observe everyday- each on a set timing of the day; Fajir in the early morning, Dhuhr just after noon, Asr in the afternoon, Maghrib upon sunset, and Isha around nightfall.

Prayer is a call to communicate soulfully with Almighty Allah and demonstrate feelings of love and devotion, reviving the God-worshiper bond and remembering His so many bounties which He blessed Humanity with.

Besides being the best of deeds after the Testimony of Faith (laa ilaaha illal-laah, Muhammad rasoulul-laah), Prayer is a means of remembering Allah’s bounties, power, and punishment, so that one keeps steadfast in his pursuit for attaining God’s satisfaction. It is also an invitation to contemplate and reflect upon the essence of creation that displays God’s most mesmerizing ability and supreme majesty.

Allah says in the Holy Quran:

This being said, denial of prayer as an obligatory act of worshipping constitutes apostasy from Islam, while refraining from observing it out of laziness is a major sin.

Jabir Bin Abdullah (may Allah be pleased with him) narrated: “I heard Allah’s Messenger (Prophet Muhammad peace be upon him) saying:

“Verily, between a man (i.e. a Muslim, believer of Islamic monotheism) and between Shirk (polytheism) and Kufr (disbelief) is the abandoning of As Salat (prayer)

No wonder it is the first act a person is asked about on the day of Resurrection. Prayer is also a means for washing sins, and it helps one refrain from sins- having engaged in a spiritual exercise of remembrance of Allah Almighty.

“Surely prayer restrains one from indecency and manifest evil.”– Qur’an 45:29

So if a person performs prayers as stipulated in the Qur’an and the Sunnah, met all the conditions set for it, Allah guarantees him that his prayer shall keep him away from all sorts of evil and sinful acts, let them be manifest or hidden, great or small.

The Holy Prophet (peace be on him) asked his companions, “if one of you had a stream running by his door and he takes a bath in it five times a day, would any dirt be left on him?.” They replied! “No dirt would be left on him”. The Holy Prophet said: “This is the case with Salat (the five daily prayers) Allah makes the Salat wipe out his sins”.

Prayer also strengthens the belief in the Existence of God and asserts such feeling and conviction in the heart, thereby purifying it, cultivating the mind, anchoring the soul and nurturing the conscience.

In a similar manner and having engraved a strong faith in Allah, His power and existence in the heart and mind, a Muslim is capable of living up to the level of faith expected of him and abide by the Laws set by Allah.

In so doing, prayer is and should help revive the original instinct in man, returning him to the original state upon which he was brought to life, with natural inclination towards the good, and equally natural repulsion from evil.

Prayer also is a good means of support, along with the quality of patience, particularly when faced with calamities or catastrophes.

“And seek help in patience and prayer, it is needed too much to do except for those of humble spirit.”– Qur’an (2:45)

Besides being an act of showing love, remembrance and appreciation of Allah Almighty, Prayer is a farther proof of feelings of gratitude to the Almighty.

It furthermore acts as a well-needed guard for the soul, prohibiting or standing in the way of its inclination towards evil and all that which is sinful, so it safeguards the person against indecency and deviation, thereby guiding him to the straight path.

Prayer in itself is a lesson of discipline and willpower, having to observe it in certain time, following certain directions and meeting certain conditions.

An integral part of preparation for performing prayer is Ablution, which readies the person’s body, spirit, and mental being, for such special spiritual encounter with Allah.

To observe Prayer, every person is required to a meet a particular set of conditions to ensure a complete and sound practice of prayer.

Upon performing a prayer, a Muslim is commanded to wash particular parts of his body, that is the ritual known as Partial Ablution or Wudu’.

Ablution involves the washing of the two hands three times up to the wrist; starting with the right hand and then the left hand, making sure that water reaches every spot of each.

After that comes the washing of forearms including the elbows three time, then with the two wet hands wiping over the head from the front, then running the thumbs around the ears and wiping it from inside. Then the person washes his feet including the ankles three times, starting with the right foot and then the left one.

If you have socks put on after having made a previous Wudu and you need to renew your ablution while you’re away from home, you may just pass wet fingers over the socks instead of washing the whole of the feet again, provided these have not been taken off during this period of time and have been put on after having made previous Wudu’ or partial ablution. This license is applied within 24 hours from the first Wudu’.

But there are some circumstances that may nullify one’s wudu, which necessitates its renewal. Such circumstances include: answering the call of nature and passing urine, feces, gas or blood.

Also you need to renew your wudu if you slept or drifted off while leaning against a support and not in a sitting position. Also if you went unconscious for any reason even if because of drugs. Same thing if you’re badly injured, bled, or vomited, you have to renew your wudu.

After the menstruation period for women, wet dreams, or intimate intercourse for both genders, a complete ablution is due for a person to pray and have his prayer accepted.

Ghusl or complete ablution entails that the whole of the body, including mouth, head, and nostrils should be washed very well with water in a complete bath.

Dry ablution or Tayamum is a kind of ablution used when there’s no water available to make the normal wet ablution, and it signifies the importance of cleaning before prayer. It is even allowed for a person to resort to dry ablution if he’s sick, or if using water will inflict any harm on him. It is also a permissible resort if making normal wet ablution would result in a person missing some kinds of prayers including funeral, or Eid prayer.

But like prayer, ablution in all its forms is not a mere ritual involving just the physical being of a person, but a symbolic act of purification for the soul and mind as well, cleaning any impact of evil or sin a person might have engaged in between prayers.

Prophet Muhammad (peace be upon him) once said:

Moving to the significance of the ritual of prayer, analyzing the weight and connotations of the physical acts it involves, together with words recited, all this has proved Prayer’s great value and potential which, if fully grasped, Prayer would be a pursuit in itself rather than a command.

This will be fully tackled in details in the coming episode of Prayer; God Willing.

Stay tuned for part II of the Prayer Series on The Muslim Tribune.